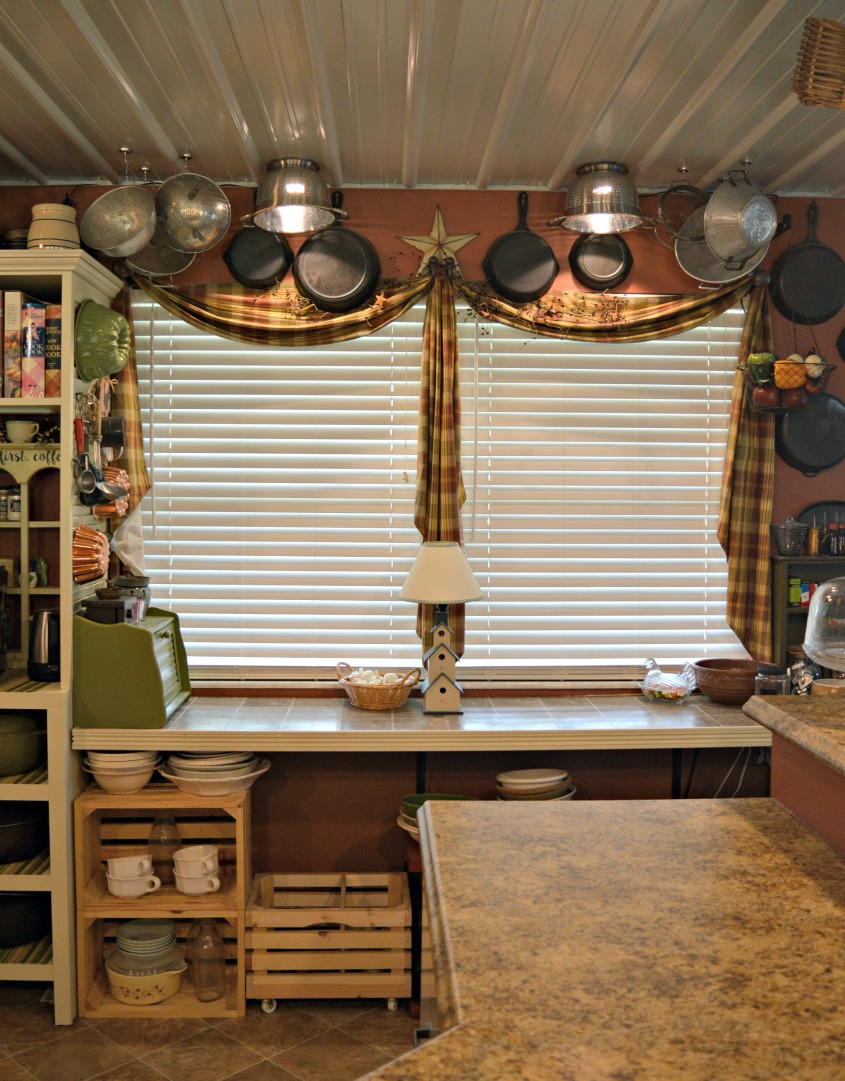 This tutorial is an easy and affordable solution for adding overhead lighting in the kitchen.

In a previous post, I wrote about a DIY Wall-mounted counter top I built and installed in our newly remodeled kitchen in an area that was just wasted space. This is the before picture below.

After we finished installing the counter top, the extra counter top space has been very useful. However, there was no lighting in that area. It was rather dark when the sun wasn’t shining through the windows. The little lamp I placed on the counter top helped, but it was not enough.

Working with a sheet metal ceiling for overhead lighting

There needed to be overhead lighting, but our kitchen ceiling is white sheet metal. I love our metal ceiling, but I really don’t want to screw or hammer holes in it. Hmm…what can a DIYer to do?

I have seen several re-purpose ideas for colanders and one of the ideas I’ve seen is to use them as lamp shades. Since our ceiling is metal, and if I use metal colanders, would strong magnets make this a possibility? So DIY hanging lights using magnets became my goal for this area.

I bought two metal colanders at Walmart for about $5 each, but you can purchase colanders here

Then I went to our local home improvement store and bought a box of under-the-cabinet lighting called puck lights.

Here is one of the lights I took out of the box. The box of lights I bought can be plugged into a power outlet, which is what I wanted.

The next step was to figure out how to conceal the puck light power cords that will be running from the wall outlet to the ceiling. Extension cords would be needed because the cords that came with the lights weren’t long enough to reach the outlet on their own.

The cord is not easily seen on the wall in the area between the top of the window curtains to the ceiling due to all the cast iron and other colanders hanging in that area.

I then routed the cord toward the area where the colanders will hang from the ceiling while pressing it into the J-trim to hide it as much as possible.

Below are the magnetic hooks that will be used to hang the colanders from the ceiling. They will hook into any of the existing holes in the colander.

The puck lights are also magnetic, so these small, but strong ceramic block magnets, will be used to attach the puck lights to the inside of the colanders.

The magnets fit perfectly inside the back of the puck lights.

Now I was ready to insert the puck lights in the colanders. However, there was a glitch. The colanders are not magnetic. Had not counted on that, but where there’s a will, there’s a way.

The other side of the Velcro strip is stuck to the inside of the colander.

Now let me explain the green wire you see in the center. As a precaution, I wired the Velcro strip to the colander because I don’t trust the adhesive on the Velcro to stay adhered forever. Below, you can see the magnetic hooks fed through the holes in the bottom of the colander. Keep in mind, this area of the colander won’t been seen, because the round magnets disks will be sticking to the metal ceiling.

The Velcro on the puck light is attached to the Velcro on the inside of the colander. With the cord fed through the hole my husband created, it was now time to hang the lights.

Hanging the colander lights to the ceiling

With the magnetic hooks in the colanders, I pressed them to the ceiling until they magnetized to the metal. I then attached the puck light cord connector coming out of the colander to the connector on the cord in the J-trim.

However, there was one last glitch to find a solution for. The on and off switches for the puck lights are on the cords. They would be too difficult to reach to turn the lights on and off. The solution to that problem is to use wireless outlet remotes.

Both puck lights are plugged into the same wireless outlet box. The remote is hanging on our refrigerator with a Command Strip®. All I have to do is push one button and both lights come on over the counter top. It works great.

I realize that not all of you have sheet metal on your ceiling. If you have a drywall ceiling and would like to try this DIY hanging colander light project, there are other ways to do this. They could be attached to the ceiling using drywall anchors and screw-in hooks. Another option would be to use long wood screws pushed through the existing holes in the colander and screwed into drywall anchors in the ceiling. If you don’t have decoration and curtains to hide the electric cords like I do, you could research creative ways to conceal them.

Like I said earlier, where there’s a will…there’s a way.

If you do try this DIY project, I would love to know. Please send pictures!

Searching is in progress